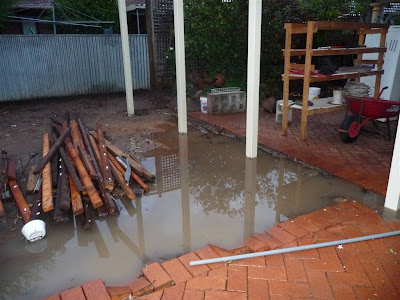 After heavy rain yesterday, the site of my new studio. 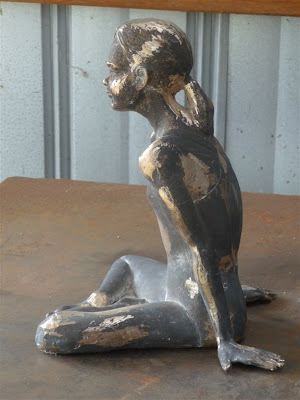 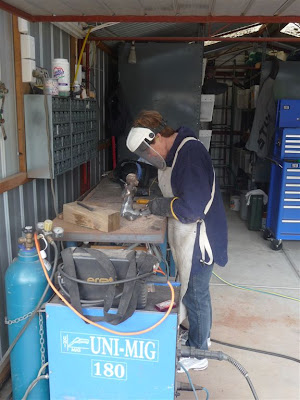 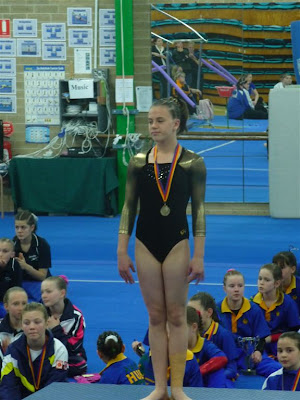 Working on the sculpture of resting dancer 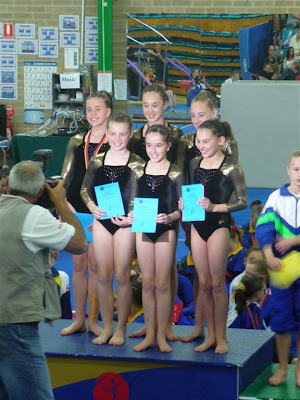 Havn't been blogging lately as there is not much news about the new studio. The builders took measurements last Monday, so now we are waiting on the steel to be measured and powder coated.
This week has brought awful weather to work in but lots of good rain and windy conditions.
I went to my son's place a couple of times to use his mig welder in his shed and cleaned up a gas blow in the bronze on top of the sculptures head. I also sat out under the new pergola to do some metal work on this bronze I have a commission for . I set up a table and stool and worked for an afternoon on it but it still needs some work with the air grinder and that is tucked away at the back of the loads of stuff from my shed.

Good news is that my daughter, Lisa and her family have just received the keys to their newly built home, so yesterday Lisa and I began packing up most of the kitchen and managed 2 trips to the new house with a trailer load of boxes and managed to unpack most of it.

Shaun has flown back to New Guinea for work, he says for a rest, as he helped quite a bit with Lisa's fences and helped us pull down the rest of the shed and jackhammer the concrete floors and helped us get the scrap steel off the property.
We even went to the movies twice with him which was a nice change.

Erin was in the State Championships for Level 5 National stream Gymnastics, and although it took an hour to get over the other side of the city and over 5 hours at the competition, Erin received top placing in the State for Vault and came 4th in Uneven Bars and their club placed 1st in teams and Erin placed 6th overall in individual scores.
She has a competition this weekend at Port Pirie, and in November will go with teammates from her club to compete in the Nationals at Canberra. I would love to go this weekend to watch her, but have work to finish to give to the foundry as they are over here next week and are picking up new wax peices for casting back in Melbourne.

I am longing to get my new studio up and running, as I am trying to work in the family room with a towel on the floor to catch the fallen wax, not always sucessfully.
will post images tonight from this post.
Posted by judsculpt at 9:29 AM 0 comments 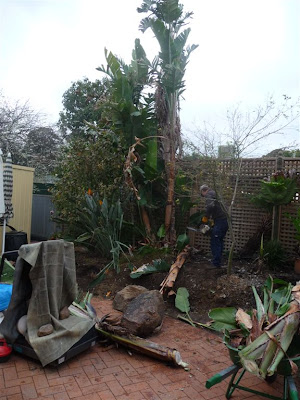 White Strilitzia almst cut down, It was leaning on the back fence 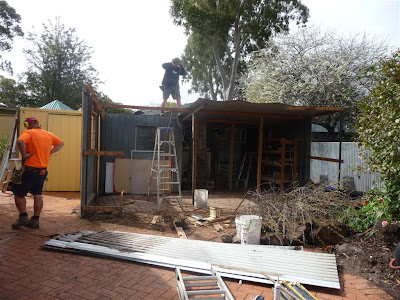 Part demolition of my shed to put up new pergola. 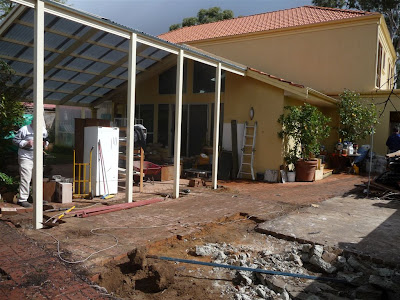 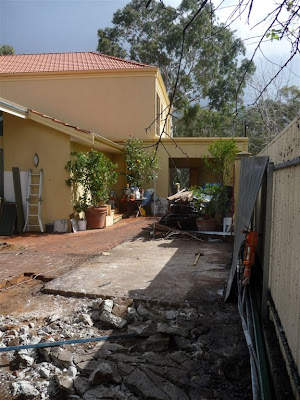 View of shed demolished in pile 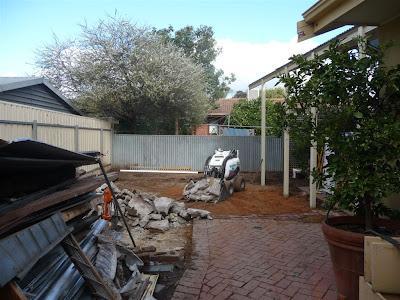 View of cleared area that will be my new Sculpture studio, can't wait to get this mess into order again


Monday the boys got to work demolishing the rest of the sheds and jackhammered the concrete so there was clear space to measure up the new studio for me and a garden shed come workshop for my husband. The place is quite a mess with stuff from the sheds everywhere under tarps and under available cover.


They measured up the available land today and we will have drawings back in a couple of days. It will yake about a month still before it is ready to move back in.


I caught up briefly with Angela on Sunday as both our family and hers were celebrating a Father's day breakfast in the local Italian Cafe. I am on my way to the TTG Potters Club today so I may catch up with Ang there.
Posted by judsculpt at 12:00 PM 2 comments

Belinda came today and removed all the bricks from my gas kiln They will be lovingly reshaped into a permanent pit firing kiln and also a Pizza Wood oven.
Thanks Belinda for the box of goodies from your garden.
The pergola is finished but now the rest of the shed has to be pulled down on Monday to be measured up for the new studio, plus all the cement and floor bricks that i have swapped pots for in exchange are to be pulled up and removed by Shaun and Jai on Monday.
Happy Father's day to all dads tomorrow.
Posted by judsculpt at 6:07 PM 0 comments