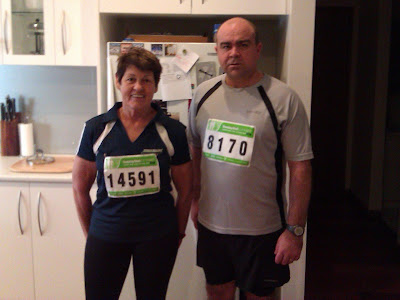 Went into Adelaide for the annual 12 km Fun Run to the bay this morning. Jude my son in law, had entered it also so we decided to run together as neither of us had trained for the run .I thought my walking would hold me in good stead for the event as I have done plenty of miles but very few consistent running training.
The weather was cool and overcast which was great for the run.
The organizers had a record 31,000 entries so there was lots of people doing it.
Jude was great to run with as he set a reasonable pace and kept it going for the whole event and although I was feeling a little tired toward the end , we finished it together, taking 80 minutes to run the 12 kms
I was hoping I would be between a 6 to7 minute per kilometre pace and we achieved it so I was quite happy with the results, but next year I intend to train for the race and try to get my time closer to the 6 min pace if I am able to.
Thanks Jude for running my pace as he could have ran a faster race but chose to help me keep my pace instead.
The Kirrabilla Trail Event is a fortnight away so we still have to keep our walking going.

I have been scheduled to talk about the sculpture of Mary MacKillop, to a local Catholic Primary school next week and have also been invited to take part in the celebrations at the Catholic Cathedral in Adelaide on the day of Mary's Cannonization in October and they will be changing the sculpture plaque from "Blessed" to "Saint".
Hope every one was satisfied with their event times, I know a lot of people were doing it including Ang, Karen and her husband, the "Step into Life Modbury mob"and Nigel.
Will have to post a photo when I get one from some one else's camera.
Posted by judsculpt at 5:22 PM

Labels: City to Bay fun run.Jude and I before run