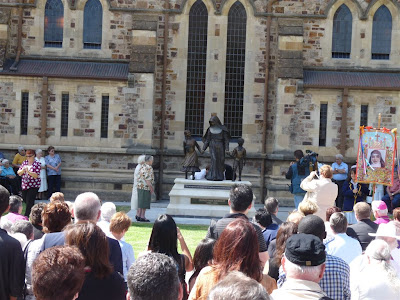 A beautiful mass was said at the beginning of the celebrations.
Elders of the Josephite sisters unveil the new statue of Blessed Mary MacKillop. 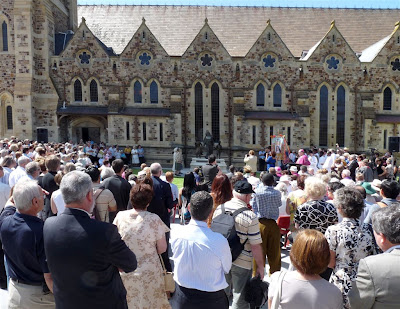 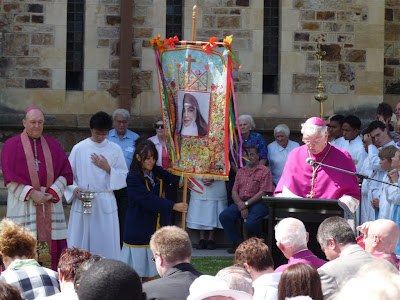 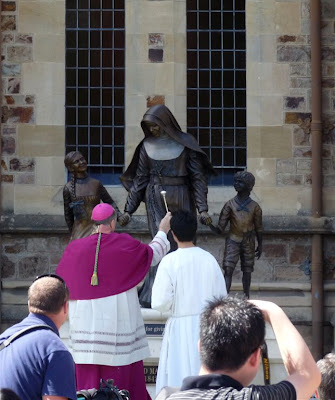 Blessing of the statue. 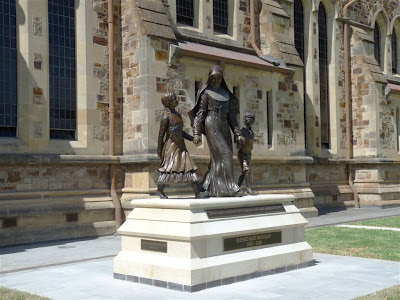 This is the statue after the the opening. I was pleased how it looked well against the stonework of the cathedral. It stands in the new Mary MacKillop Plaza beside Victoria Square, in the heart of the city of Adelaide, South Australia.
Many of the Josephite sisters were in attendance and also three sisters from India attended the unveiling.There were many congratulations from everyone and everyone was pleased with the image that I had conveyed. Family from Queensland, New South Wales and Victoria as well as Adelaide, came to the unveiling and stayed the weekend to celebrate with us.

Posted by judsculpt at 9:05 PM 5 comments

Cameron and myself after the installation 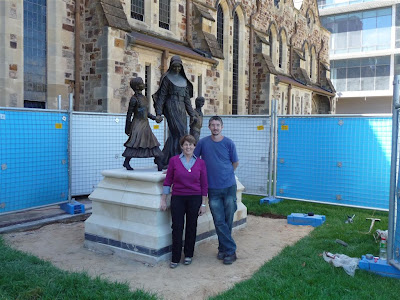 Cameron, from Fundere Fine Art Foundry bought the sculpture over to Adelaide and installed the sculpture with the help of Heritage Stone who supplied the stonework and crane. Thanks to everyone who helped us.
Posted by judsculpt at 5:31 PM 0 comments

Labels: Relief is evident in my smile 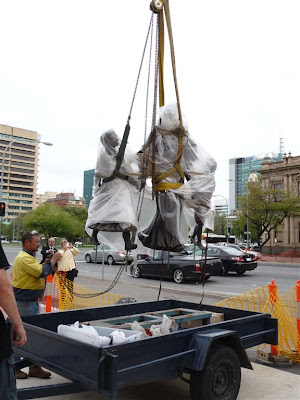 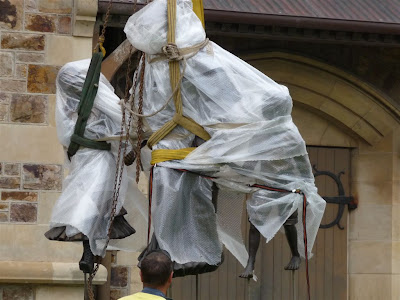 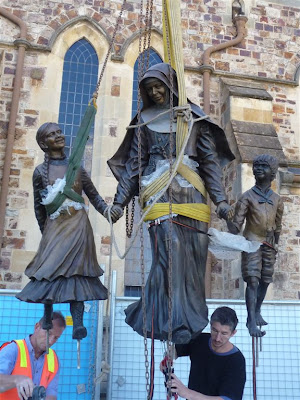 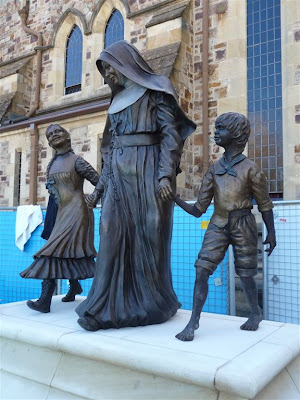 Mary MacKillop has now been installed on the stone plinth yesterday and has been polished and covered in readiness for Sunday's Opening. All went well.
Channel 7 TV News were there to catch the installation and the Bishop, the Provincial head of the Josephite sisters and myself were interviewed and a 20 second spot was on the TV news last night and it was nice to receive some calls to congratulate me after people spotted me on the news.
Posted by judsculpt at 5:08 PM 0 comments

The Installation of the sculpture of Mary MacKillop is now tomorow to allow the concrete another day to set. The plinth is in place and they have poured the internal concrete but we have to be in the city ready for an 8:30 start.The lifting will be done by the stone masons, we will have a trial run to get the precise area for drilling and then the base will be drilled and epoxy placed in the drill holes and the bronze set in place. Cameron from Fundere foundry and I will then rewax and polish the bronze ready for the unveiling. Lighting, bronze plaques and paving round the sculpture will also be finished this week as well and the sculpture will be covered and fenced off till Sunday. Because it is a very busy weekend in the city with the V8 Clipsal 500 car racing on as well, channel 7 are going to be there at some stage in the morning, to film the new sculpture and so hopefully, it will be shown on TV channel 7 tomorrow evening presumably. The Church asked if the two granddaughters could be present in their school uniforms. I really don't want to be labled as grandmother rather than artist. It makes me so annoyed, as I should be taken seriously as the artist, not grandmother.
So all should happen tomorrow.
I have also been asked to speak about " A Spiritual Likeness" at "Spirituality in the Pub"
which happens every month. I am to be teamed with a wonderful animal sculptor, Silvio Apony of whom I hold in very high regard of his beautiful work. We both have 20 minutes to talk.
I am a little nervous about it still. It will take place on Tuesday evening, 7th April, at the "Old Mill Pub" Hahndorf, SA.
We have had a busy weekend with Shaun flying home the day after his 40th birthday from PNG.
He ended up having a suprise birthday party as friends were celebrating Mandy's 40th too and included Shaun in with Mandys' Party. His friend Tanya flew in as well as his uncle from Victoria. We also celebrated his sister Lisa's birthday and went out to see a Fringe show that Lisa's daughter, Erin was in "A Carnivale Cirque de Gymnastique"which was very entertaining.
Posted by judsculpt at 1:57 PM 2 comments

Posted by judsculpt at 8:51 PM 0 comments

Sculpture has arrived in Adelaide 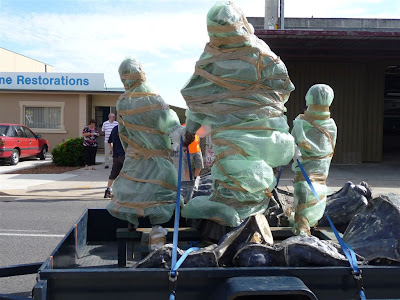 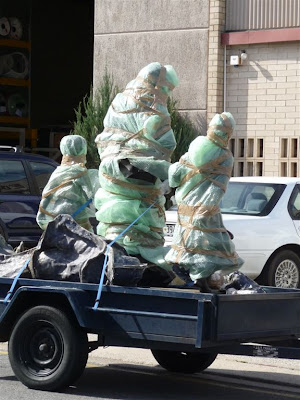 Fundere Foundry have brought the sculpture over to Adelaide safely.
It will be erected on the 16th and covered until the unveiling on the 22nd March.
The moulds were brought over as well. I feel nervous waiting for everything to be in place.
The stone is now at the cathedral ready to be assembled.
Posted by judsculpt at 8:25 PM 3 comments 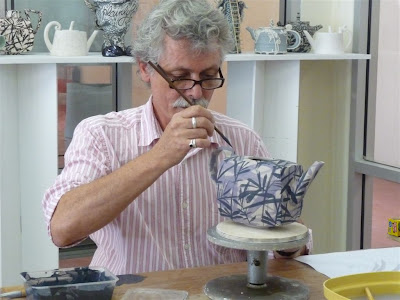 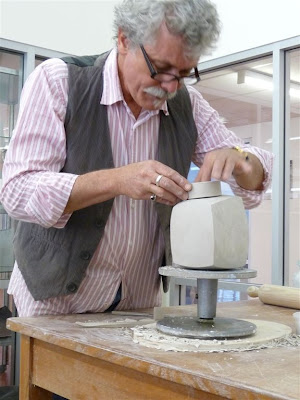 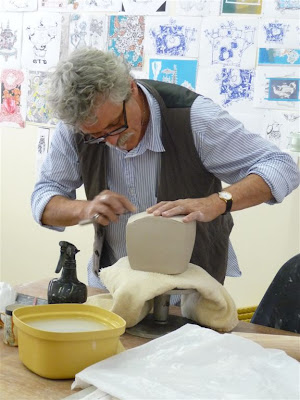 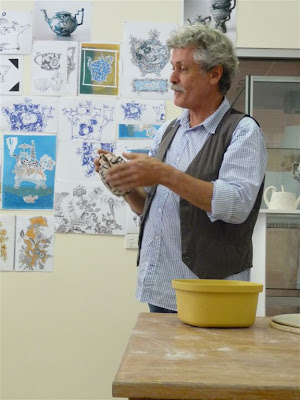 Bruce is head of Ceramics at Adelaide Center for the Arts.

Posted by judsculpt at 2:27 PM 4 comments 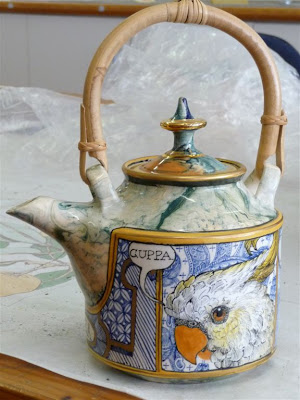 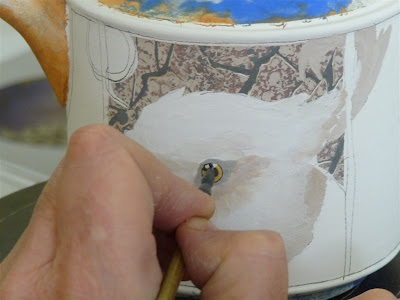 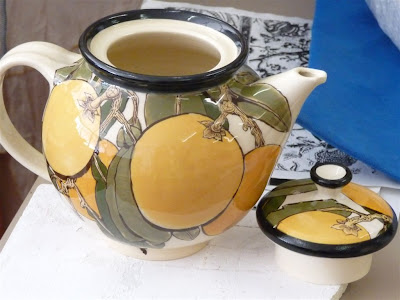 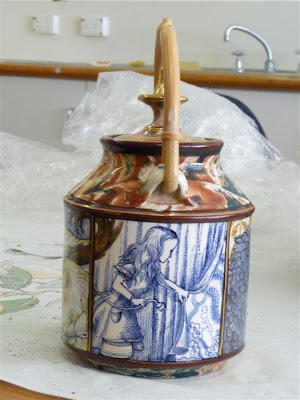 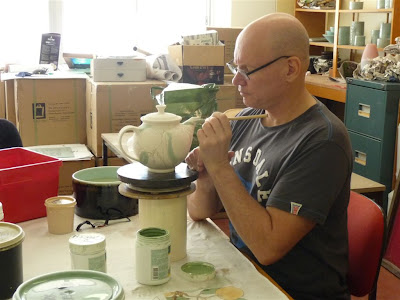 Stephen demonstrated underglaze painting on several teapots and fired the Oranges one to show the final product. He painted it Saturday afternoon, bisqued the underglaze overnight and then quickly fired the glazed teapot and had it to show us Sunday afternoon. Amazingly fast firings with no ill effects. He also painted a small blue and white teapot and decorated his famous cockatoo style paintingon a third teapot.He has marvelous control of the brushes he uses.

Posted by judsculpt at 2:10 PM 0 comments 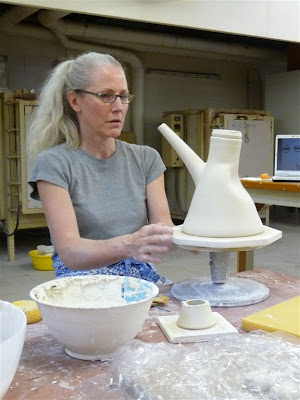 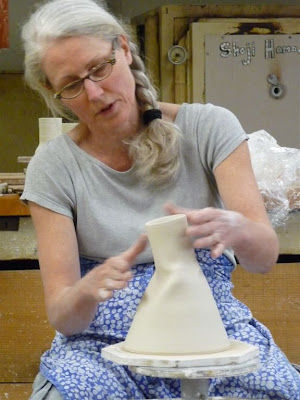 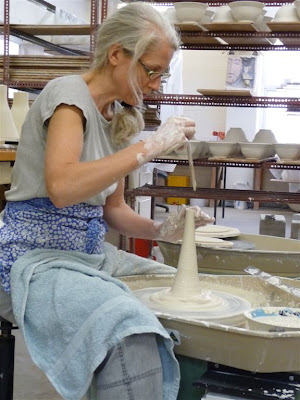 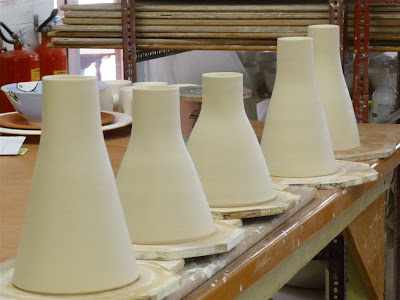 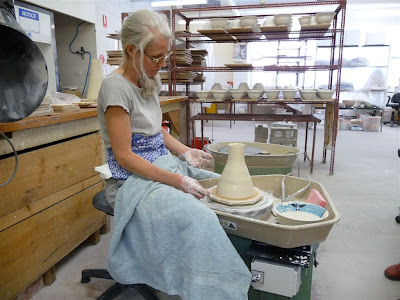 Posted by judsculpt at 2:01 PM 0 comments