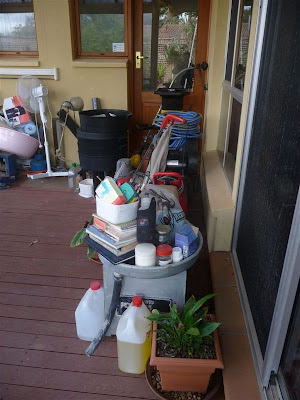 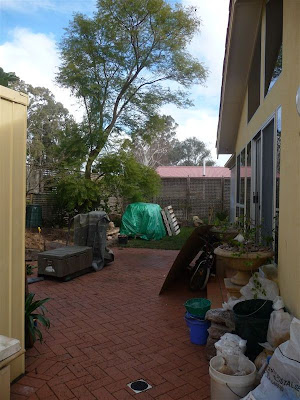 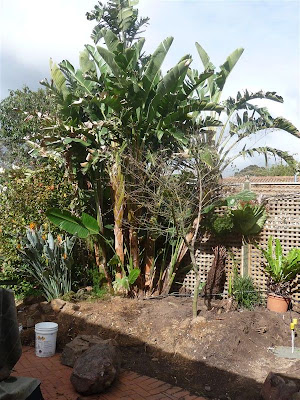 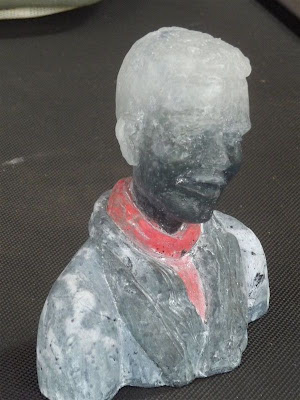 Not a good photo of glass from David's class. 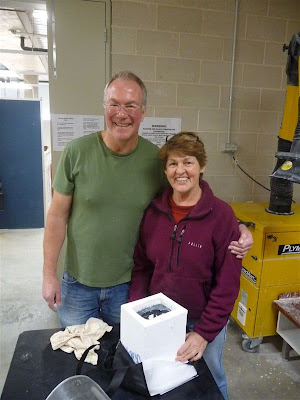 With David Reekie and my glass from the last firing. 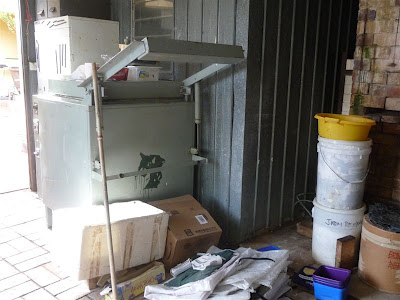 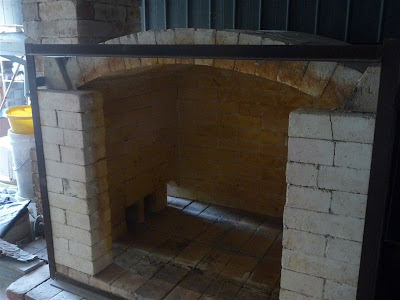 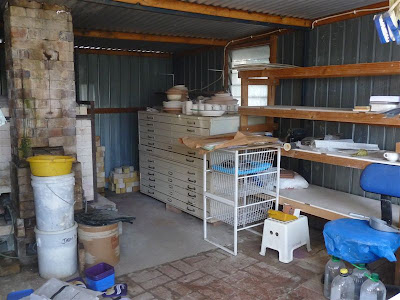 back of shed with gas flue 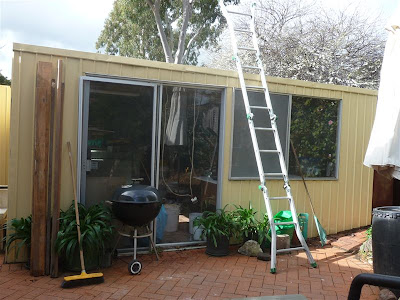 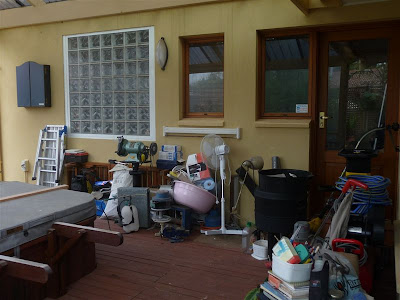 Pergola with stuff from shed.

I'm not sure I should have started this!

I have been working on clearing out my studio/shed for the last three weeks now and I have ended up with 3 pallets stacked full of gear covered with a tarp and loads of other stuff under the pergola. The garden has been shifted back against the a metre from the fence so a pillar can be put in to hold up the lawn side of the back yard. Actually 2 pillars went in amid the downpours of rain today.
The builder is going to build the new pergola against the back of the house whilst we clear the two sheds and pull all the concrete and brick floor up, as the back of our block isn't squareand we are building up against the boundary and it is a job to get the angle correct whilst the sheds are standing.
We need to pull down the old gas kiln and move the electric kiln out of the sheds but the rain hasn't stopped for a few days,and we need some help with shifting the heavy gear.
I hate the mess the yard is in but I will have to be patient until my new studio can be built so I can regain my space again.
Hope Ang is having a great time in the UK.
David Reekie will have left to go back to the UK also.
Well that's all for this post except to say I unloaded a whole kiln full of bisqued pots that had been stored in the gas kiln and I found some were dated 1989, and also found a mother and baby possum living in the kiln chimney having made a sleeping area on the damper bricks.I found them when I tried to pull out the damper and found it heavy to shift.
Posted by judsculpt at 9:12 PM 0 comments

New studio to be built and the old one removed

I haven't had a chance to take some photos of the glass that came out of the kiln but i have done some basic cleaning of the pieces. The second piece isn't exactly how I planned it to look as the head was supposed to be milky white but the colour has gone into the head and I should find out on Sunday as the class group are having a BBQ and I should see what every one else has done.
We were invited to The Lord Mayors evening last night and I caught up with a few old lecturers that I had back in the 70' and 80' so it ended up being a pleasant evening.
My husband John and I went out to dinner seeing we were dressed up.
I have been in the garden today as we have to get sone tree stumps grubbed out ready to have a pergola built as well as pulling down the shed which has been my workshop since the 80's and now needs to be redesigned to be able to do some taller sculpture. It used to be my pottery and I won't be throwing out all my potting gear but it needs a major overhaul and with the pergola also being built there is a lot of cleaning up to do as well as sorting out the old shed.
Posted by judsculpt at 6:49 PM 1 comments