I spent a few hours out at the Tea Tree Gully Craft Workshop club today whilst the girls were firing the big gas kiln for the second time since it has been rebuilt.
.
Ang was  firing a raku kiln and also keeping a eye on the gas firing.


I put 6 mugs in my own kiln firing (which I had thrown and bisqued about 15 years ago). About time I glazed them. It's funny because I haven't glazed pottery for so long, I really had to think what I was doing. 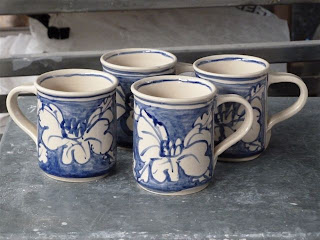 I glazed the second head I had decorated, and fired it in my kiln at my studio, and was very disappointed with the results, although the clear glaze worked well. I'll have to practice my brushwork a lot more before I work on something I want to keep. 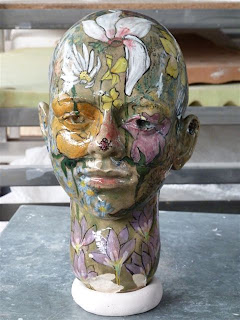 Belinda and her daughter pose for me, for a drawing I need to produce for a proposal.
As you can see it is a beautiful winters day, the sun was glorious. 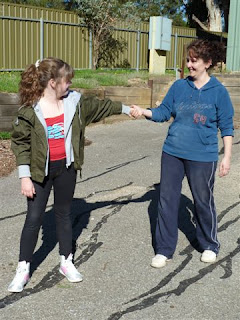 Last of all I had made a small statuette of Mary MacKillop, made moulds,  cast it in porcelain , underglazed it and fired it at the same time with the head and mugs. 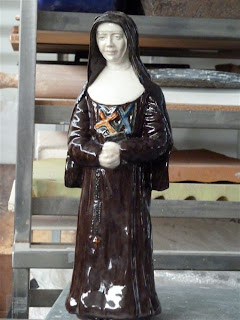 .
I am  showing some work  at St Ignatius Art Show during SALA festival in August. I am putting the torso I had cast in bronze into the show but will need to see if they will accept it . There has been some rejections with nude work of late  so I will have to wait and see . 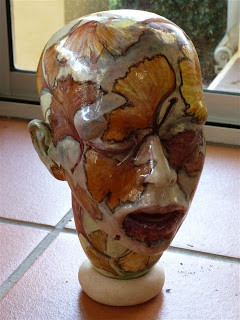 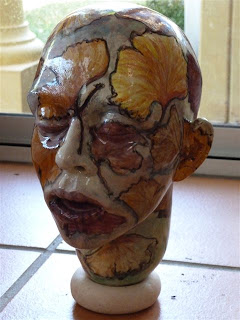 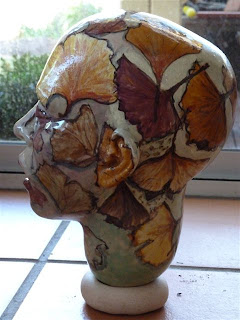 I have had a couple of heads sitting waiting for some attention . I modelled them  after reading how Tom Bartel makes hollow sculptures by coiling the head instead of working and modelling a solid head and later hollowing the head at the  leather hard stage.
At the time I was waiting for the Mary MacKillop commission to be agreed upon, so I made these two heads to try out the coiling idea.
The first was trying to make a head that was pleasant.
The second one I had been playing around with the thoughts of portraying ecstasy as portrayed in "Bernini's St Cecilia", so I had eyes closed and mouth slightly open. 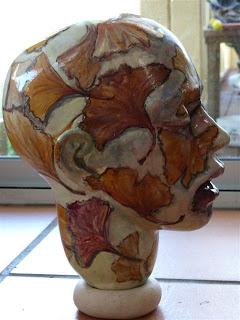 I always wanted to glaze them with colour and so I finally decided to give each one a theme. 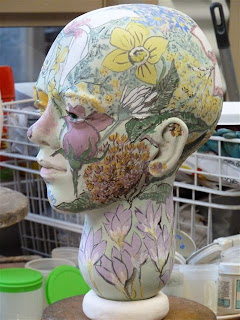 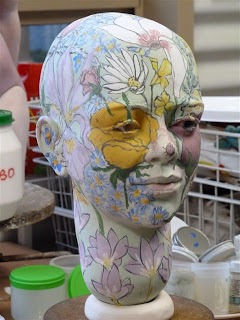 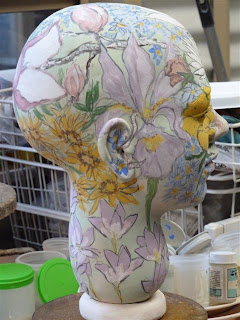 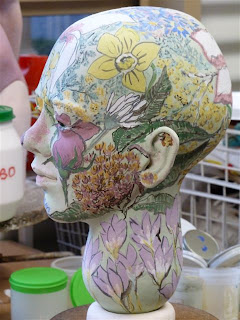 The first I called it "Spring" and I intended to paint spring flowers all over the head with underglazes. The second one, because of the expression, I thought it would be good as "Autumn". I had collected a whole lot of  beautifully shaped fallen yellow leaves from some Gincko trees outside UNISA in the city and they had appealed to me so I drew them all over the second head, painted with underglazes and fired it with a clear glaze at 1100c oxidation. I forgot to photograph it before I glazed it.


I was disappointed with the results as I used a painterly approach and the underglazes really did not blend.
I have painted the second head and need to use the club glaze as I haven't enough glaze left in the bucket.
So I haven't fired it yet.
What do you think of the result? I would like to put them in an upcoming Art Show but "Autumn " is a little confronting.
Posted by judsculpt at 1:29 PM 3 comments

My husband took a few photos of me as I felt the photo I have been using is rather old and I needed a recent one.I was amazed how old I look and I suppose I have resisted looking too closely at my image of late.Needless to say I really wasn't impressed with what was the best of the photos,( am I really that heavy in the face and so-oo matronly?).
Last winter I managed to loose a few kilo with bush walking, jogging and exercise, but getting back into sculpting and not exercising the past six months has taken its toll and I have regained the extra weight again.I'm so depressed.
I was cleaning out my cupboards and came across a portrait I did at TAFE college half a dozen years ago and was impressed that I had painted it so long ago,(I spent a year not dying my hair).I was trying to relate how I viewed myself as a sculptor, hence my hands in front of the portrait. 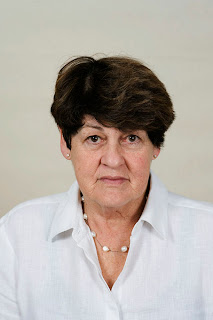 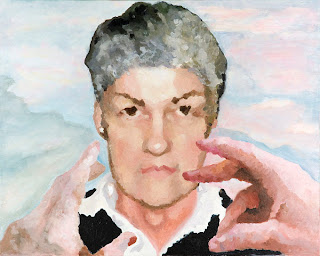 Occasionally I look at where people land in on my blog and one of the most popular pages is about bodycasting.
So there are people wanting information on bodycasting.
I received an email from  sculptor.Olivier Duhamel in New Zealand who has written two manuals about body casting and bronze casting and is soon to release a new manual on  mould making.
I have actually ordered one of his books, but haven't yet received it, so I was interested to promote his website
for those persons who are interested, like me, in reading practical books on the subject.
His web address is :- www.bodyscape.net.nz/bronze-casting-tutorial.htm.I haven't been able to post this to become a link so I will have to retry but in the meantime I am sure you can reach him.
The manual looks to be a wonderful "do it yourself"book and I am looking forward to having a read of it.

His website is a great place, please visit.Please see the website address also in the sidebar on blogs
Posted by judsculpt at 4:52 PM 0 comments

I came back from Melbourne and caught a nasty cold which lasted a week and suceeded in giving it to the rest of my family.
Erin already had a bad cold that week so she wasn't completely well competing at the State Women's Gymnastic  Championships and didn't place, but had done enough to be selected to represent South Australia at the National Championships in Perth,Western Australia, in 6 weeks time.Well done Erin, I'm so-oo proud of her and her achievements.
I have decided to have two Open Studio weekends during  SALA  in South Australia during August this year.
The opening times are 11:00am to 4:30pm, 13th and 14th, and 20th and 21st, August.
Come to the studio and ask questions about my  working methods and view the various sculptures I have on hand and for sale.
Have a glass of wine and some nibbles whilst you are visiting me.
We have finally finished the pergola area in front of the studio and replanted the back garden so it is quite lovely to sit and look at sculptures and have a sip of wine and be warmed by the outdoor heater.
Hope to see you there!!