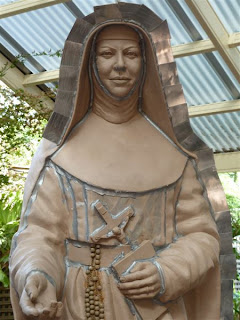 Shim fences and silicone placed in the deep recesses. 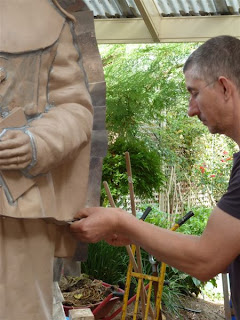 Placing the dividing fences of shim. 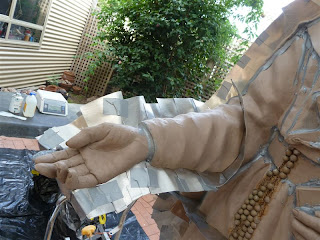 Details of the shim fence around the hand. 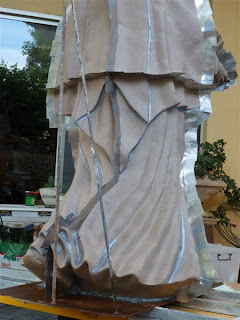 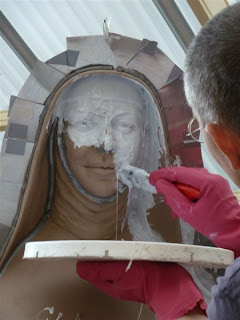 Beginning to paint on the fluid silicone rubber on the face.

Saturday is the third day of making the mould of the Mary MacKillop sculpture.
Cameron from Fundere Fine Art Foundry is doing the work.

He travelled over from Victoria on Wednesday (an 8 hour road trip,) and began work on Thursday.
After placing aluminium shims at areas where he wanted to have separate pieces of the mould, he then began to fill in the deeper recesses of the modelling with  commercial silicone.
Cameron then began to work a fluid silicone rubber over the highly modelled parts of the sculpture and left them to set overnight.
I cut up squares of felt ready for the next day and and Cameron also tore into small squares fibreglass matting ready for the epoxy resin.
Posted by judsculpt at 6:35 PM 1 comments 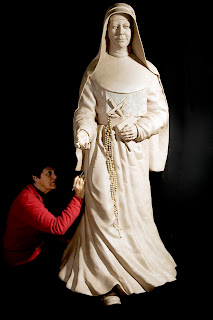 Posted by judsculpt at 5:58 PM 1 comments 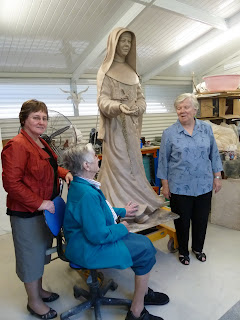 Sisters' Maryellen, Terisita and Marie visit the studio to see the the new sculpture for Sydney . Sister Terisita is over 90 years old and enjoyed the visit.

It's so long since I have actually written a blog, no one will want to look anymore.
But I have been working all this time.
I have been asked by the Sisters of St Joseph at Mary MacKillop Place, North Sydney, NSW to design a new statue of Mary MacKillop to be placed outside the Mary MacKillop Memorial Chapel in North Sydney.
The design for this was accepted last November and we then agreed to the new sculpture going ahead so I have been working the last three months modelling the figure.
The foundry will come over to Adelaide after Easter to take the moulds to make the waxes for it to be cast into bronze.
They will have the over life size bronze ready for installation in September this year.

The press release about the new bronze will be released next week so I am also allowed to blog about it.
It had been confidential up until now.
I have had so many of the South Australian Sisters of Saint Joseph out to the studio to preview it before the foundry comes to make the moulds.
As Fundere Fine Art Foundry is situated in Victoria in the suburb of West Footscray, Melbourne, most people from South Australia will not see the finished bronze as it will be shipped straight to Sydney NSW.
So I have asked friends and people interested to see the sculpture to arrange to see it at the studio before the foundry arrives. 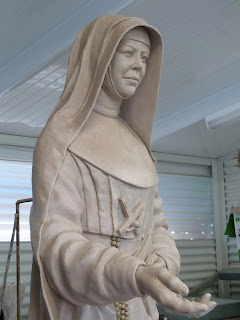 Over the next few weeks I will post photos of the work as it progressed the last few months.