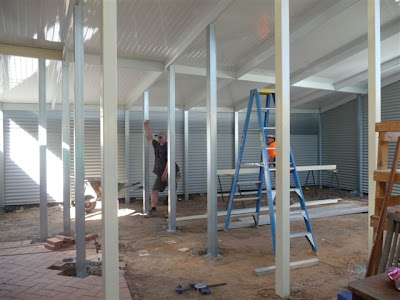 Looking through the interior with the back wall and roof built. 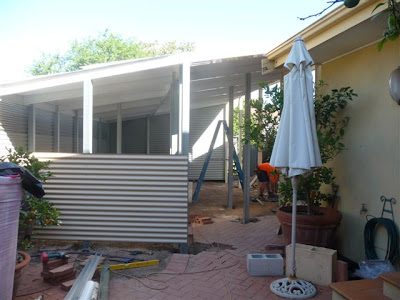 View down the side of the house with the cladding
partly finished. 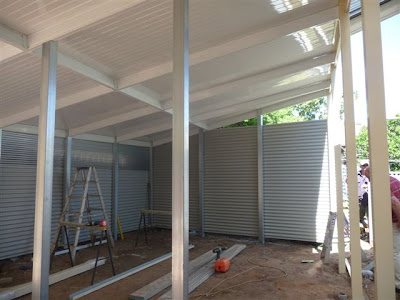 Interior of the new studio. 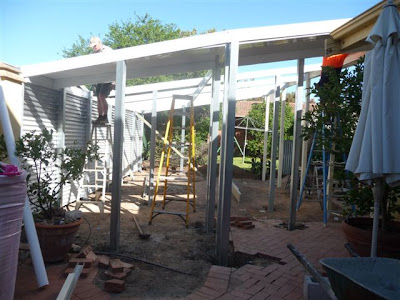 Looking through John's workshop and through my studio to the back garden of the back neighbour. 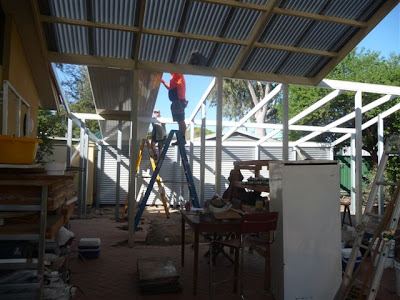 Roof being built.
View from the back of the house with the studio being built up to the new pergola.

Something changed with the way I used to make my photos ready to put on the blog and it has taken me some time to get my head around how to reduce the photo sizing for blogging. I am a hopeless person withcomputer technology, so it really throws me when they update software and I can no longer use the simple tricks that I have been shown. It makes my blood boil after trying for hours to upload photos, only to fail and not be able use the photos to illustrate my blog.Well here I go again.after trying last night for an hour to post these photos.
Posted by judsculpt at 10:57 AM 7 comments

I am slowly seeing my new studio come to life . The builders will finish the outside cladding tomorrow. We need to get the electrical wiring in and the concrete floor down as well. We have been waiting for someone to turn up since last Friday and finally someone came this afternoon and took measurements and will ring back a quote tomorrow, but said they were busy till next weekand and couldn't fit it into their work schedule till then, so either way I am left with my studio partly built.
Once the electrical and concrete work is finished the builders will come back and fit out the interior walls and someone will make the doors and window .
We will also need to have the paving relaid around the outside of the walls and we want to add a watertank as well so it will take a while before all these jobs are done.
On another note, I rang the foundry and they will be ready in 2 weeks for me to fly to Melbourne, to finish the artist proofs of Mary Mackillop minature, ready to take back to the Catholic Church. The Catholic Church are producing an Edition of bronze minatures of Mary MacKillop.
I also finished another bronze for a client in Queensland and they received it this week and were very happy with it.
I also received an invitation to exhibit with Artistic License Gallery next July so I will need to get some new work on the go.
Cheers for now, I will try and post some photos with thisblog although I didn't get to post the last lot of photos.
Posted by judsculpt at 9:26 PM 1 comments

Still waiting , very impatiently for my studio to begin. With the wild windy wet weather we have had this week, it has been hard to work outdoors even with the new pergola.
I have been finishing a sculpture and was looking for my chemicals for patination and had forgotten just exactly where I had packed them and to be out in the wind whilst I heated up the bronze to apply the patinas made it hard work. I am feeling quite annoyed that it has taken this long to have it built.I seem to have stuff littered all over the place trying to fond a nook that is wind protected.
Posted by judsculpt at 9:55 PM 0 comments

Thanks Doug for the lovely bowl. I finally called round to Ang's place on Monday and she gave me your bowl.
So great to actually hold someones pot from another country and she showed me the pieces she made at your place , including the Cardew slumped platter.I also got to hold some mugs from Ron Philbeck so it was wonderful to hear how she went, including seeing Lincoln Kirby Bell.
Thanks so much for showing her things that she can show us in Australia.
I hurridly took some photos of the Minatures before I gave them to the foundry to mould but they are rather dark and hard to see details.
My husband also found a piece on Mary MacKillop made for canadian Tv and there were a couple of shots of the sculpture beside the Cathedral, which was interesting to see, although they did not name me as the sculptor.
Posted by judsculpt at 9:05 PM 0 comments

Working with the aid of a magnifying lamp. 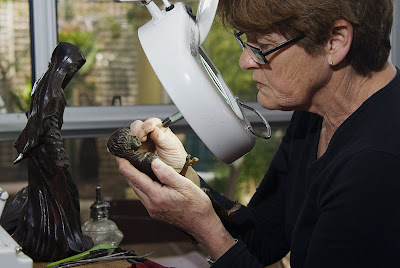 Posted by judsculpt at 6:28 PM 2 comments

I have been keeping my latest work under wraps until I signed the agreement today.
I have been working on a minature of of the Mary MacKillop sculpturein wax and completed it yesterday and signed an agreement with the Catholic Archdiocese of Adelaide for them to produce an edition of minature bronzes for collectors to buy.
The work has been done over a period of 3 months whilst getting an agreement written to licence the Catholic church to reproduce the the original sculpture as an edition of minature bronzes.
I have now finished the waxes, working the last week on the details through a magnifying lamp.The foundry picked up the waxes and are transporting them back to the foundry where they will take a month to make the moulds and make an artist proof in bronze which will then be signed off by myself before they begin production of the minature bronze for collectors and anyone interested in owning a minature in bronze of Blessed Mary MacKillop.
We hope people will be interested in owning this sculpture as it will be used as a fundraiser for the Adelaide Archdiocese.
We are also hoping that Mary MacKillop will be made Australia's first Saint on the coming year. She is such an extraordinary early pioneer in the late 1800s, and many Australians are waiting for her to be made a saint.

Meanwhile, I have been impatiently waiting for my new studio to be built but as the land available does not have a single right angle to each corner, the builders are having to get everything custom ordered,so I will still need to wait another week before the studio has all the bits made ready for building.

My daughter and her family are now feeling happy to be in their new home. It takes 15 minutes to drive from our house to their's and we have been going every day to see what they have unpacked and put in order.
Young Erin travelled to Port Pirie for an invitational Gymnastic competition about 3 hours away by car last weekend. She placed 2nd overall in individual competition and placed first on the uneven bars adding a 1 and half giant circle to her routine and placed 2nd in vault beam and floor in level 5 A.She was the only gymnast to attempt a giant circle amongst the level 5 and 6 competators and had the spectators very quiet whilst she performed her routine on the uneven bars.
Posted by judsculpt at 7:33 PM 3 comments