"Becoming Pierrot"
This allegorical work gives the viewer clues to the painting's meaning.
The rusty iron bar and the orange twine holding a small wax figure are all part of the puzzle as are the brushes and tools held in an arthritic hand,her ear plugs and hair covering.
The artist has deliberately tried to mask her feelings by holding her gaze at the viewer behind her "Pierrot" mask but the tear allows the mask to slip a little, spoiling her image.

Any comments would be gratefully received by me. There is a preview of the painting in a previous post.

On another note, I was bush walking earlier in the week and took my camera with me to record some of the wildflowers and now that i have a book on wildflowers, thanks to Tanya,
I can now look them up and give their correct botanical name, more next week.
Posted by judsculpt at 10:18 AM 1 comments

We traveled to Sydney last Saturday and had accommodation graciously supplied to us by the Sisters of St Joseph at Mary MacKillop Place, North Sydney.
The Commemorative mass was held on Monday 17th October and the sculpture was unveiled and blessed at the last part of the mass.
There was a large tv screen to show the unveiling and blessing to the large crowd of people at the open air mass.
During the prayer of the Faithful I was very touched to be included in the prayer.

"For Judith Rolevink, the sculptor of the figure of Mary MacKillop,
May our  creative God Bless her in every way for her imagination and skill in crafting such an inviting image of Mary."

After the mass we were invited to a lovely lunch with about 100 also attending.
So many people came up and thanked me for the statue and there was a long line of people lined up to be photographed beside the statue.and to look at it.
I am sure it will be well supported in the years to come and I felt very overwhelmed by all the attention it has received.I am sure it will be well loved by the people of this parish, and beyond.

Kathleen and Barry were guests at the second anniversary of the canonization of Mary MacKillop.
Kathleen 's complete cure from cancer was the second miracle needed for Mary MacKillop to be canonized.
It was lovely to meet up with them again in Sydney.
Posted by judsculpt at 6:06 PM 3 comments

Sally Parnis is an artist whose painting I bought from St Ignatius Art Show several years ago. She has a photo album of daily drawings that are so good.
I posted a  photo she sent me in the last post but I could  only get the photo and the announcement on, for some reason it would not let me write other than a caption on the blog. I seem have all sorts of trouble blogging sometimes.

We had a fun day yesterday with the granddaughters learning how to cook Macarons and a sponge cake.


My husband is the main cook in our family and enjoys a bit of french cooking , so he said he would teach the girls during the school holiday break.
Posted by judsculpt at 6:30 PM 0 comments 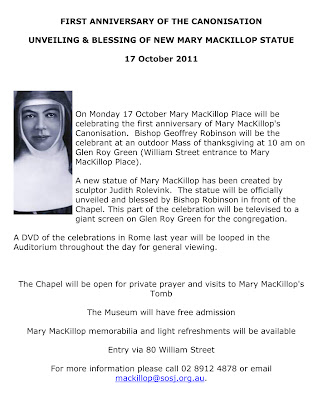