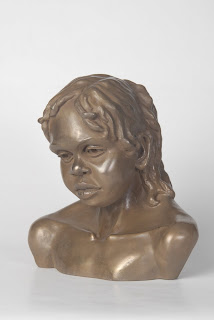 Well it's been quite a week. I met with the Architect who has designed the plinth for Mary MacKillop Statue and he had heard a wisper that problems were found in the soil where the site for the sculpture is to be sited and that will put the dedication back awhile, to at least January/Febuary next year, which makes me feel rather depressed as I hoped it would be ready soon. I have been working on this project for over a year now but it will be next year now before it will be unveiled.
I have been drying out the small clay sculptures that I have made and yesterday i added colour to the piece I named "Best Friends". I wanted to add some detail to the colour before I put it in the kiln and accidentally rocked the stand it was on and it went flying to the floor and broke into 10 pieces. I couldn't believe my bad luck. I ended up just putting the pieces in the kiln along with the other sculpture to bisque them,I felt so angry with myself for breaking a potentially sweet little piece and I did'nt even photograph it.
I also returned the "Josephite habit" I borrowed from the convent over 6 months ago,and spoke to one of the sisters there, and she asked how the sculpture was progressing.
Sala is finally over so I can get on with some more work. The Olympic Games gave me more ideas for work, as I like to model children at sport and play, and the young chinese gymnasts had some wonderful poses.
Time is getting away from me before I have to have work ready for the exhibition at Artistic License in October so I had better stop typing and do some work for it instead.
Posted by judsculpt at 7:56 PM 0 comments

View Album
Get your own
Posted by judsculpt at 10:36 PM 0 comments

I have been meaning to write but there seems to always something taking my attention away. I've just this week started to jogg around the creek track by my house to get a little fitter as Ang can testify I need more fitness.
I have begun some small figurative sculptures in clay, hoping to have them bisqued in time for the Raku firing on Saturday but they are still damp so I have missed out again, so instead I have put my name down for a 10 weeks course on porcelain techniques at the Jam Factory instead.
I have made 3 sculptures in clay so far. Two of them are small 8" and 6" figures of young girls ,"Friends" and the "The Fall" and a larger piece the "First Toe Shoe Lesson". I'd like to colour them so have to decide how I'm going to achieve that.
As well as having the Olympic Games on TV, it's hard to concentrate.
I also read Emily Murphy's blogsite which I recommend for bloggers.Better get back to work.
I have added some photos taken on the way home from the foundry around the Great Ocean Road, which is a beautiful trip.
Posted by judsculpt at 12:01 PM 0 comments

Posted by judsculpt at 5:11 PM 3 comments 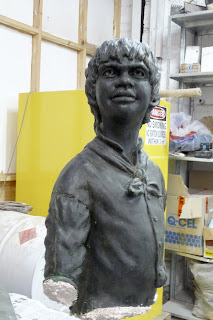 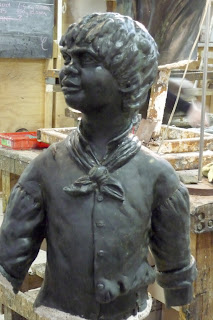 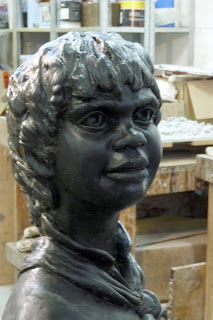 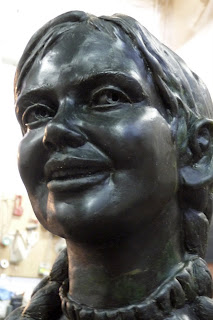 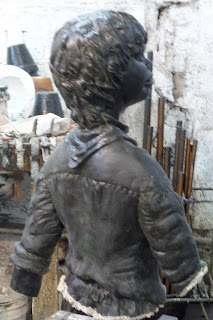 Posted by judsculpt at 6:47 PM 2 comments

Posted by judsculpt at 6:37 PM 0 comments

Can't get these photos on correctly!

I have a good number of photos to put up to show how the waxes look. They look fantastic if only I can publish correctly.
I have been busy this last week getting work ready for two Sala shows, one in town "Wishlist" at The Space Between, Level 1, 187 Rundle street, Adelaide where I have 4 cast crystal glass sculptures of Mother and child minatures and the other out at the Tea tree Gully Craft Workshops on Crouch Road , Golden Grove.
This week I finished one piece for the coming exhibition at Artistic License. I am one of five artists showing there from 10th October to 2nd November this year. I have begun work on another piece today. Unfortunately they will be clay not bronze as I have not enough time left to work them as bronze pieces.
Posted by judsculpt at 9:33 PM 0 comments

I have been very slow to post these photos, I seem to lose them in the system . This will be the third time I have attempted to load these photos, so here goes another try.
Posted by judsculpt at 4:44 PM 0 comments